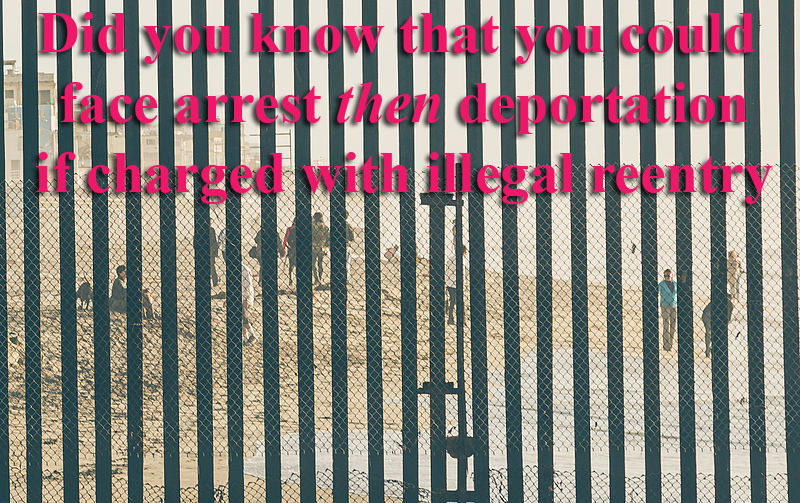 Illegal Reentry: Top immigration criminal lawyer John Helms explains why you could face criminal charges for being in the US illegally while others are deported

Most of the time, if a person is found to be in the U.S. illegally, they are deported, reports immigration criminal lawyer John Helms. This means that they are sent back to their country of origin. If they are from Mexico, they are usually sent back to the closest point of entry to where they entered. For example, if they came through Laredo, they are taken to Laredo and escorted across the border.

Sometimes, though, the federal government charges a person found here illegally with the crime of Illegal Reentry. If the person is found guilty of illegal reentry, they may receive a lengthy prison sentence and THEN be deported.

This type of criminal charge can be very confusing to the accused and their family. I am often asked things like, "Why are they charging my son with a crime? In the past, they just deported him." Or, a family member might say, "I have heard of people being deported, but not being sent to prison. Why are they picking on my husband like this? It seems very unfair."

In order to understand why someone might be charged with a crime instead of just deported, you have to look at the person's circumstances. First, a person will only be charged with the crime of illegal reentry if they have already been deported at least once in the past. The crime is called illegal RE-entry, not illegal entry. This refers to the fact that the person must have RE-entered the United States AFTER having been already deported.

The U.S. government does not charge people with a crime and send them to prison if they have only entered the U.S. illegally once. If the government sent everyone to prison instead of deporting them, our already clogged courts and crowded prisons would be pushed to the breaking point. Instead, the government only charges someone with a crime if they are a repeat immigration offender.

Second, whether the accused has committed a crime in the United States is an important factor. The law does not require that the accused must have committed a prior crime, but many federal prosecutors will not charge the crime of illegal reentry without one. This is because of a policy in the offices of many federal prosecutors that federal resources should only be used to prosecute and potentially put people in prison if the person has previously committed a crime in addition to being here illegally and is therefore a threat to law and order. In fact, some prosecutors will only prosecute illegal reentry cases when the accused has previously committed a serious crime--called an "aggravated felony." This helps explain why some people could be deported more than once and why someone who has committed another crime might be charged with illegal reentry, educates immigration criminal lawyer Helms.

What if two people have both committed the same crime in the U.S., like DWI, and both have been deported before, but one was simply deported again? Does that mean that the other person cannot be charged with the crime of illegal reentry? The answer is, "No."  The law does not require that a person who commits a crime cannot be charged with the crime if another person who committed the same crime is not charged. Otherwise, if ONE prosecutor decided that government resources should not be used to prosecute a crime, then NO ONE could be charged with that crime in the future. U.S. law gives prosecutors a lot of leeway to decide which cases to charge and which ones they will not, and the law does not require prosecutors to be perfectly consistent.

This does not mean, however, that it does not matter at all that others in similar situations were not charged with illegal reentry. This can be a very persuasive argument that the accused should not receive a harsh PUNISHMENT. It is an argument that can be made to a judge when asking for a short time (or no time) in prison if the accused is found guilty.

In my experience, illegal reentry cases usually involve more than just the accused. There are often family members and loved ones who are affected, too. Part of a lawyer's job is to help them understand the process and the options for their loved ones as well.

If you, a family member or someone you know has been charged with illegal reentry in the Dallas area, contact Dallas immigration criminal lawyer John Helms at (214) 666-8010 or fill out the online contact form. You can discuss your case, how the law may apply and your best legal options to protect your rights and freedom.