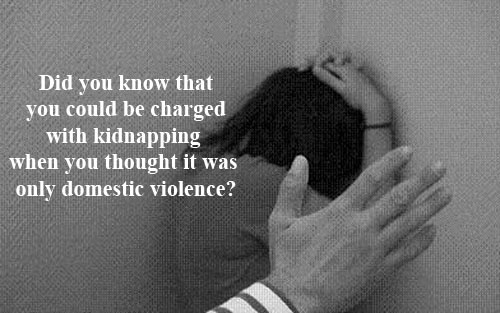 Dallas defense lawyer John Helms discusses how domestic violence can become kidnapping, and how to develop a winning defense to this charge

Most people probably think of kidnapping as involving holding someone for ransom or taking someone to a secret place to assault them sexually says Dallas defense lawyer John Helms. Kidnapping in Texas is much broader than that, and many criminal defendants are shocked that what seems like a domestic violence incident can sometimes be charged as a kidnapping.

A lot of domestic violence starts with alcohol. Sometimes, both the man and woman are drinking heavily, an argument starts, and one or both people cannot control their temper. Then one person wants to leave, and the other wants that person to stay--maybe for a good reason, like not wanting the other to drive drunk, or maybe for a more selfish reason, like fear that the other will call the police.

If one person in a domestic violence incident tries to prevent the other from leaving, a felony unlawful restraint or kidnapping charge can result. In Texas, "unlawful restraint" means "intentionally or knowingly restricting a person's movements, without consent, so as to substantially interfere with the person's liberty, by moving the person from one place to another or by confining the person." This becomes a third-degree felony if the defendant recklessly exposed the victim to "a substantial risk of serious bodily injury."

Similarly, kidnapping means intentionally or knowingly abducting another person, which is defined to include "restrain[ing] a person with intent to prevent his liberation...by using or threatening to use deadly force." This is a third-degree felony, but it becomes a first-degree felony if a deadly weapon is used or exhibited.

So, let's say that two people who are staying together get into a drunken argument that becomes a fight. Then, one person, in a drunken attempt to prevent the other from leaving, slurs out, "If you try to leave, I will kill you."  That arguably involves restraining a person with intent to prevent the person's liberation and with a threat of deadly force. If a gun or a knife is merely displayed, it could quickly become aggravated kidnapping, which is a first-degree felony. And it does not matter that the victim was not physically hurt. That is how a domestic violence incident can become aggravated kidnapping very quickly reports criminal defense lawyer Helms.

Developing a winning defense in this kind of domestic violence case requires a thorough investigation as soon as possible. Anyone in this situation should contact an experienced and skilled criminal defense lawyer immediately so that the investigation can begin before vital evidence is lost.

If you, a family member or someone you know has been charged with domestic violence or related kidnapping or have been convicted and need help with an appeal in the Dallas area, contact Dallas defense lawyer John Helms at (214) 666-8010 or fill out the online contact form. You can discuss your case, how the law may apply and your best legal options to protect your rights and freedom.