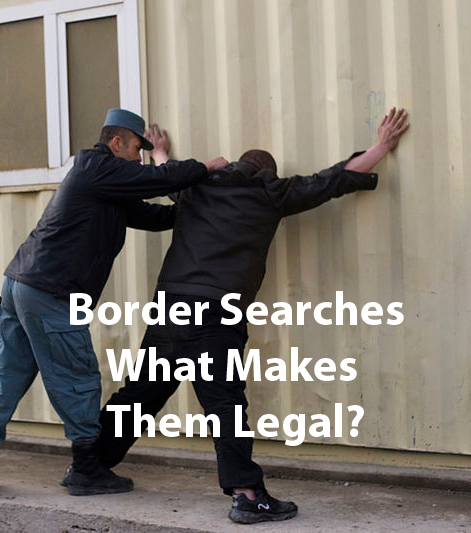 Can the government do searches at the border without "reasonable suspicion" that you’re committing a crime asks Dallas criminal defense lawyer John Helms.

The Trump Administration has announced that it wants to increase security at our borders. Immigration and Customs Enforcement (ICE) agents may therefore become more aggressive in searching people and things that cross the border. So what are the limits on what ICE agents can do, and what can you do if your rights are violated? asks John Helms Dallas criminal defense lawyer.

Generally, in each case, the courts consider: (1) the government interest at stake; (2) the degree of privacy that is invaded; and (3) how effective the search or seizure would be in promoting the government interest. There is no formula, though, for how to use these criteria to strike the right balance between reasonable and unreasonable.

On the other hand, for the police to search your house, they generally need "probable cause" to believe that the house has evidence of, or the fruits of, a specific crime. They also generally have to get a search warrant, which means convincing a judge that there is probable cause. "Probable cause" is more than reasonable suspicion.

At the border, though, the government has much more leeway under the 4th Amendment. This is because the government has a very strong interest in controlling its borders and preventing illegal things and dangerous people from coming into the country. After all, if something or someone gets past the border, it becomes very hard to prevent harm from occurring. Examples of things the government tries to stop at the border include plants with diseases that could harm crops in the U.S., people or animals that have diseases that could spread in the U.S., animals that are not native to the U.S. that could spread and cause harm because they have no natural predators here, and, of course, illegal drugs.

Also, keep in mind that the "border" includes areas near the actual border, as well as airports where international flights arrive, even if they are far from the actual border. I had a case recently, for example, in which customs agents searched my client's cell phone after he arrived at the DFW airport on a flight from Mexico. The rules for border searches applied to that case.

Because of the government's need to protect the borders, our courts have consistently held that government agents can conduct "routine searches" of people and property at the border without even having "reasonable suspicion," which is what a police officer would normally need to pull a car over. For example, in a case called United States v. Flores-Montano, the Supreme Court held that the government did not even need reasonable suspicion in order to detain and remove the gas tank of a car that was crossing the border. Agents had noticed that the gas tank did not sound hollow when they inspected the underside of the car, so they removed the gas tank and found drugs hidden inside. The Supreme Court said there was nothing wrong with this even though the rules would have been different away from the border.

A good example of this is a Supreme Court case called United States v. Montoya de Hernandez. In that case, agents believed that a woman was smuggling drugs inside her body based on her travel pattern of going into the United States and returning very soon after, her statements that she did not have any place she planned to stay or anyone she was meeting, and the feel and appearance of her stomach when she was patted down.  She was detained and given a rectal exam by medical personnel. A balloon was found filled with cocaine. She was detained for over four days, and 88 balloons filled with cocaine passed out of her system. This would have required a search warrant away from the border, but the Supreme Court said that the agents had reasonable suspicion, and that was enough.

A difficult and unsettled issue involves searches of smart phones and computers. The government has taken the position that these are no different than containers that can be searched like a car, without even reasonable suspicion. But at least one federal appeals court and two federal trial court judges have concluded that these devices are different because they can contain enormous amounts of information that can be extremely private. Many people's entire personal lives can be easily revealed through the contents of their cell phones or computers.

These three courts have basically said that agents can turn on and manually look through someone's cell phone or computer when they cross the border. This is what happened to my client who arrived on a flight from Mexico. According to these courts, though, the government must at least have reasonable suspicion to take the device and do a forensic examination on it. A forensic examination involves using software to search for hidden or deleted files or images or to do other types of sophisticated searches that cannot be done manually. The United States Supreme Court has not ruled on this issue, so it remains undecided.

In extreme cases, a person who is subjected to a highly intrusive search, like a body cavity search, may be able to sue the government for damages.

If you or a loved one has been charged with a crime based on evidence found during a search at the border (or an airport after an international flight), you should consult an experienced and skilled criminal defense lawyer in order to protect your rights. In the case I mentioned, for example, I was able to get the case dismissed within a few days by reviewing the facts thoroughly and talking to the prosecutor. The law in this area is very complicated and unsettled, so it is critical to hire a lawyer who really knows what they are doing in the area of border searches.

If you, a family member or someone you know has been charged with a crime or have been convicted and need help with an appeal in the Dallas area, contact Dallas criminal defense lawyer John Helms at (214) 666-8010 or fill out the online contact form. You can discuss your case, how the law may apply and your best legal options to protect your rights and freedom.